A small insight into the mysteries of the future - Part II 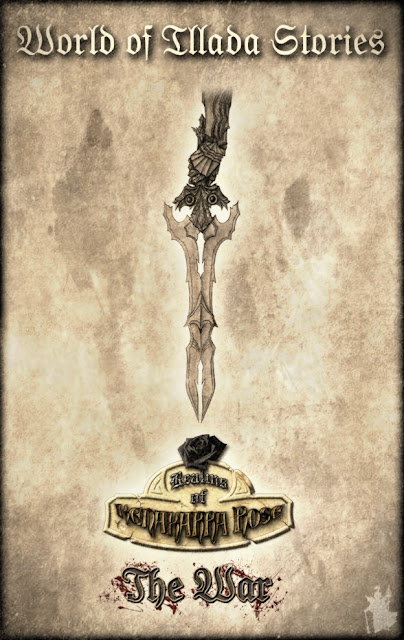 Let me welcome you to the second part of our sketchy peek into the near future. In the last post we have sketched out primarily plans in connection with our miniatures and our PR. In today's post, we will focus on what our miniatures are linked to inherently - the world of Illada and its history.

Stories will expand the world of the Black rose and also bring background for our miniatures and they will be slowly preparing the ground for our 32 mm board game.

The Great War for the Black rose of Kenakarra was a huge global conflict and many events are hidden inside it. Events you will become familiar throughout our miniatures and texts about Illada history.

We will try to approach these texts more conceptually, put them into separate units to let you find any aspect such as history event or other facts more easily on the Arkhareon Miniatures site.

Although the big diorama is postponed for some time, you will meet figures and scenes from the battle on e-shop soon. Story of this battle remained untold so we have to get it right. Finishing telling history of this event is obvious and we will bring it to you as a serial – like you have got used to.

Prosperity and the first decline of Illada


You could have already read about the genesis of Illada world HERE. We have also brought you the background story about a great conflict between Guiulthans and other noble races which had ended in the second decline of Illada and basically had flown into a bloody Great War for the Black rose ten thousand years later (you can find it HERE). However, between these two stories is a gap. We will fill it up with another serial called ‘Prosperity and the first decline of Illada’.

Races and armies of world of the Kenakarra rose

On our main website you must have noticed the page describing the races living on Illada. You can find descriptions and art concept for several races known from our stories there. Description of these races will get increasing. Illada is a really big and complex world with many races and species. Therefore we will establish a new one web page besides this one. This page will be gradually get acquainted with animals, lesser beings and beasts of Illada and later also Bharngstarm - dark, demonic parallel empire you could have met in the story of Guiulthan dark wizard Sorok and in the story of the battle of Irrnon-Sol Terrat.

Religious, military and knight orders around the world of Illada


There were several military orders during the Great War for the Black rose in the world of Iliada. Some were wedded directly to specific races, some enrolled warriors of different races into their ranks. Some orders had religious character, others were purely military or knightly. We are going to bring you information about these orders subsequently. Everything about their establishments as well as their role in the history of the Great War. On January 16 we will start one of the most important order the Dragon Knight's Order, a respected community of warriors who (among other things) inhabited and protected the Stronghold and the Temple of Arkhareon. Yes, just in connection with this order you will learn more details about the Temple, after which we named our company.

And one more thing we can say. You will meet the Dragon Order at our first Kickstarter campaign.

The story of the Great War for the Black Kenakarra Rose

Well, we are getting to the main topic finally. We are preparing an extensive series about the Great War, which is a critical period for our stories and miniatures. The series will have two main parts. In the first one you will gradually become acquainted with the history of the conflict since its beginning. Shortened descriptions of important engagements will be important part of this story.

In the second fraction of this story we will focus on campaigns and battles, which will be mapped in detail specific events and fates of some of the figures. Any such battle or campaign will have its own story and these stories will be enclosed in a compact unit.

While stories about the history of the Great War will be posted gradually and continuously; stories mapping the main specific events will be issued as a part of detached project that they will go with and support.

It’s about our plans for stories about Illada for now.

Have a nice day

Daniela and the A-team
Posted by Arkhareon in 11:40 am

Email ThisBlogThis!Share to TwitterShare to FacebookShare to Pinterest
labels: About Project, Historical background of Illada, Our Kickstarter Campaigns