This is officially launch of our first competition.

Task: Think of a name for the weapon held in the right hand by the magic lantern bearer (the photo below).

This double-blade ancient weapon is used by kworgs for a very long time - since the first Illada wars – the Shadow Wars. It represents the two flames of fire built against each other (two blades) and initially, at the time of its inception. It has been a weapon of fiery Kworg guard. In the following millennia it have become a prolific weapon.

It was quite difficult to control it (especially because of the ancient Kworgs primarily worn decorative jewelery (crests) on the backs. They were called ‘Back-gems’ or ‘Back-crests’. These gems were quite light but usually large and complained efficient handling of the weapons.

Despite of this the Kworgs acquired great skill and control of this two-sided sword and become true masters. Later, however, their arsenal, including this weapon, has disappeared as Kworgs slowly took over customs and style of life of the humans.

During the Great War for the black rose their armor and weapons still carried elements of beauty and magnificence of the former Kworg noble-minded race but it was just a dim reflection of the great glory and splendor of past years. The split in their own ranks and their civil war have pushed Kworgs onto more pragmatic way and so this once famous war weapon have appeared only very rarely during the War for Kenakarra rose.


So much for the historical background of this weapon. We are already looking forward to the names you create for this weapon.

Extract from the rules

And do not forget - 25 of you can win our vignette. 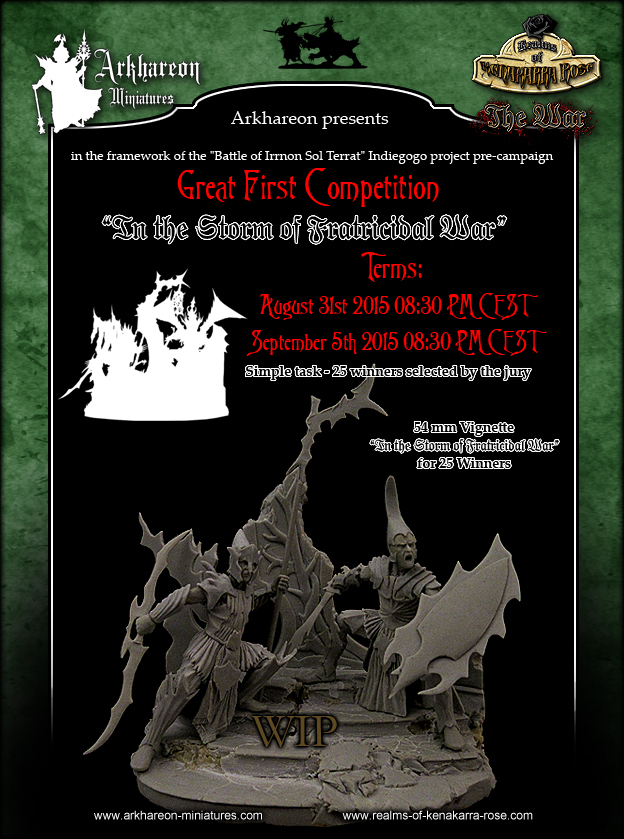 Come on, the countdown has started, you have five (5) days from now.


Good luck and many creative ability wishes you the incoming jury

Posted by Arkhareon in 8:30 pm

Email ThisBlogThis!Share to TwitterShare to FacebookShare to Pinterest
labels: Our Competitions, Our Crowdfunding Campaings, The storm of Fratricidal War