Greetings to all adventurers, warriors and noble knights.

Today we uncover history shrouded with millennia in front of you. Yes millennia.

More than 15 thousand years before the launch out of the Great war for the Black rose had broken out great Kworg rebellion which resulted in a long fratricidal conflict. It had divided their nation once for all at the end. This war had given birth to a new realm of renegades who had been called the Dark Kworgs. More about this conflict can be found here.

Our vignette "In the Storm of Fratricidal War"  introduces you to the scene of the first fighting in Riadenia - the Kworg capital.

The first figure is the officer from the king's personal guard - the Aldeasts. This warrior was honored to carry the magic lantern, one of the three lanterns owned by Kworgs. These lanterns served not only as supreme royal guidons but also had great power - while the soldiers carrying the lanterns, saw their lights like a blazing flame throwing around pleasant glow, enemies were dazzled by bright lights of the lanterns. It was impossible to look at.

The second of the figures is figure of king Abration in his in his majestic armor with stylized wings on his back. He participated in the fighting personally and led his troops against the rebels.

So here is WIP of our vignette for the competition. What do you say? 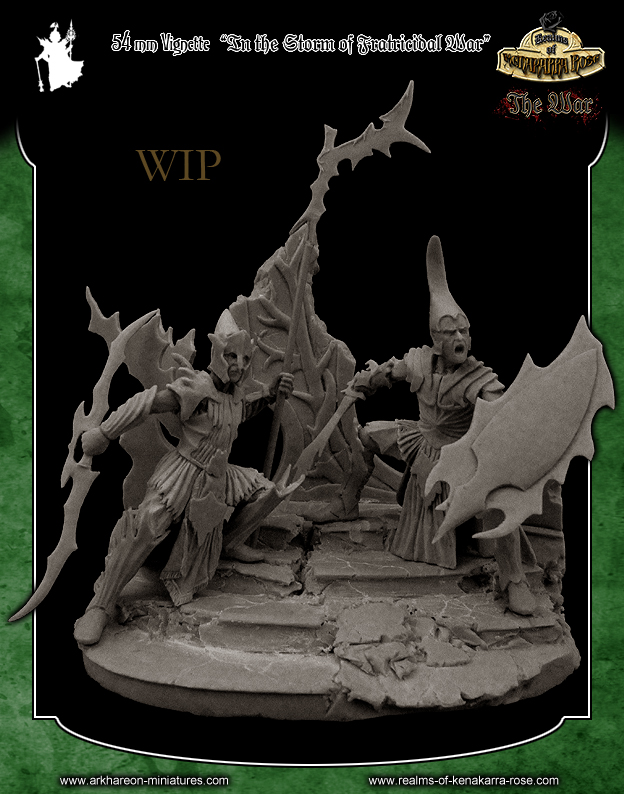 Daniela and A-team
Posted by Arkhareon in 8:21 pm

Email ThisBlogThis!Share to TwitterShare to FacebookShare to Pinterest
labels: Miniatures Concepts, Our Competitions, Our Crowdfunding Campaings, Sculpts - Figures, The Battle of Irrnon-Sol Terrat, The storm of Fratricidal War