Basic Information about the game 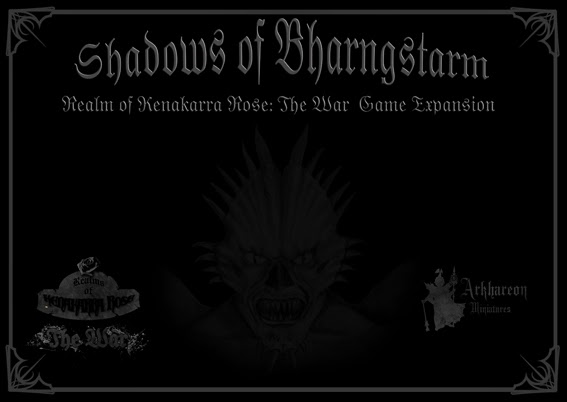 -   Shadows of Bharngstarm can be played as an independent, full game or as an expansion set for original Realms of Kenakarra Rose:Dark War game

Shadow of Brangstarm makes from originally wargame with RPG elements fully-fledged cooperative Wargame-RPG hybrid system where both wargame and RPG gaming styles are used and it makes this game something unique.

-   As an expansion set for the  Realms of Kenakarra Rose:Dark War it is automatically divided into three levels described before – Board Game; Skirmish Game and Battle War Game). Thanks to it a huge complex is available. There can  be (but it is not needed!) used all available options of the original game.

-   If Shadows of Bharngstarm is played by more than two players, they can command individual characters of one (the same) nation or may be become a general to command whole army of nation they chose before. There are many possibilities which will be described later.

-   If you want, you can play a single quick game. However, if you want to use full potency of this expansion, we recommend you to accept the Campaign system using all game levels and immerse yourselves into the Shadows of Bharngstarm where you can build new life for yourself and your party in terrible dark realm  full of demons, monsters and other strange beings serving darkness; shadows where you never know what to expect.

-   Your primary task is simple – get back home, back to Illiada. But as you know, it is impossible. Is it?

World of the Dark War and Shadows of Bharngstarm is still changing so don’t forget to get back again and again!


NOTE: Rules for both the main game and the expansion set Shadows of Bharngstram are still under development and finall version can be different. We do all we can to create a world you will like.

Next time: A fast paced game versus sophisticated combat situations
Posted by Arkhareon in 8:43 am