Elrainia, the combat girl of Argerra, the Mistress of "Arkies", reconnaissance, marauding squad composed of Kworgian women only, will fight in this little vignette with the rider of Bharngstarm on the eight – legs Beast. 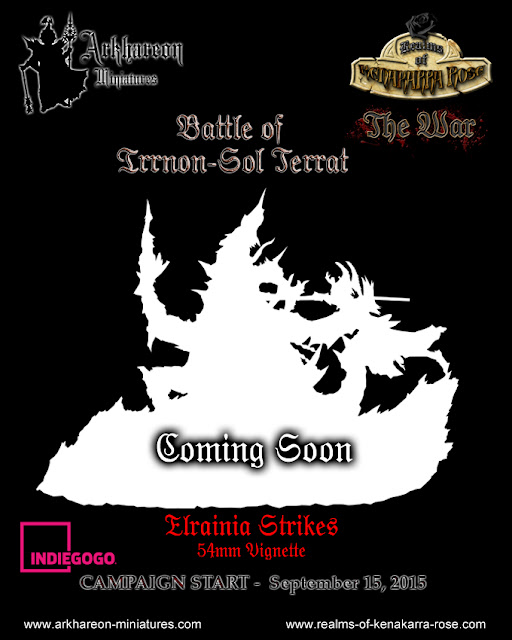 Elrainia was one of the most successful combat girls of the Argerrian Kworgs Dusk army. She was the daughter of Faertenien ´s brother Fenrainal, so she had the task to be the Mistress of warriors due to her origin. She was not given by the strategic thinking, but she was a very valiant amazon. She has the same physical condition as a man. Elrainia ´s squad was used for reconnaissance and special secret tasks in the rear of the enemy very often. In fact, they had the similar mission as japanese medieval Ninjas.

She fought in the battle of Irrnon-Sol Terrat together with her uncle - general Faertenien. She was one of the three warriors, who managed to escape from this battle.

After general ´s death, a terrible bloody massacre started. Elrainia was badly hurt and after the blow to the head she lost consciousness for the whole day. She woke up the other day, and she had a huge stroke of luck . The Beast-warriors from Bhrangstarm decapitated many dead enemies to make the war trophies. The victorious army encamped nearby and only the Bharngstarm decapitators and the Dark Kworgs warriors went through the silent land to get some war prey. Elrainia took off her armor and she could got very discreetly to one of the fight wall gorges. She got to the opposite side of the rock wall in the darkness of the night and she escaped the battlefield this way.

In our little vignette, intended as our add-on, Elrainia fights with the Bharngstarm rider on the eight-legs beast. In the Bharngstarm dark dimension, many sorts of bigger and smaller beasts existed. These beasts were used as the transport and war animals by the dark demons warriors. Elrania fought just with such a rider on the beast a short time before her hurt and unconscious. Our little dramatic reconstruction shows her last fight.