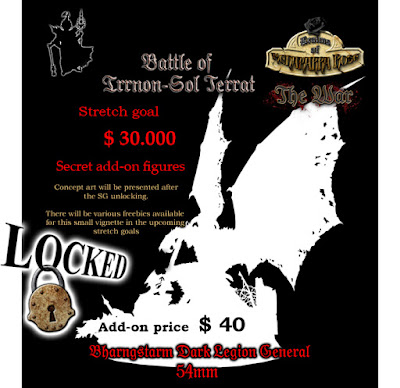 By the military campaign of the Dark Kworgs to Argerra, which should provoke  the Argerrian Dusk Army, the flying Beasts of Bharngstarm units took a part in the night conquering of the  fortress of  Irmainan too.

More informations about this episode coming soon. The vignette shows the general, standing on the ruins of the  conquered fortress, with the dead soldier of the Border Guard. 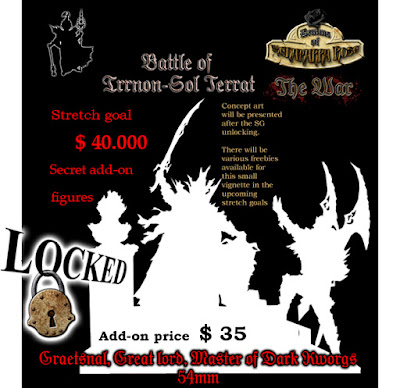 This vignette shows you  Lord Graetsnal at the moment, when he -  fully armed -  goes from his palace to his soldiers to  begin his great campaign to Argerra, which will culminate in the battle of  Irrnon-Sol Terrat. Graetsnal took his best armor to this campaign. This armor was made specially for this campaign and .it was very decorative. There was a beautiful relief depicting the Dark Kworgs beating the Argerrian Kworgs warriors.

Downstairs of the palace is giving respect to him one of his generals, called  Armengar – the rhymester (very cruel warrior, who wrote poems about his famous deeds). Although the Dark Kworgs and their general  had a terrible reputation, his poems have been appreciated as very beautiful and artistically valuable ones. Please, remember his name, you will hear more about this general yet. 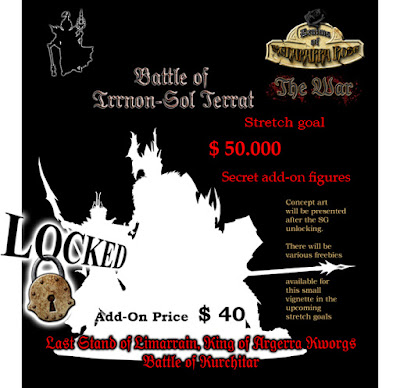 The vignette shows the king Limarrain  last stand  and two of his warriors -  guards lancer and  Langartraphia, the bodyguard of the  king and his private spiritual mentor in one person. This age - old office remained until the times of Liayates – Creators of the world of  Illada.

Posted by Arkhareon in 9:18 pm