The Kworgs, one of the noble races created by the Liayates – Creators of Illada - divided into several nations the same way like the Elves. After a terrible fratricidal war, which started 14 000 years before the Great war for Kenakarra Rose broke out, this race divided itself into two nations. Those ones, who caused this conflict and left to the west after the war, were called the Dark Kworgs.

Another Kworgs were not able to become the noble and famous race as they were before the war again . When their king Abration died, they were still strong enough to be able to defeat Sorok – the Master of Guiulthans and the dark sorcerer too and to destroy the second Kenakarra rose (the complete Kenakarra Rose story you can gradually follow here), but they started to divide into the three smaller nations.

Those ones, who stood in their old empire were called the Kworgs of Rasthianath.

Another nation – the Kworgs of Barduanel - came to the north and they created a very small empire next to the Syrgonian Elves empire. They took their name after their first king Barduanel.

They went to the northwest of Illada and they founded the empire of Argerra. Argerra was quite remote from the empire of the Dark Kworgs, but as demonstrated in the future , it was not far enough to be safe and well protected. As the only empire of Kworgs was Argerra attacked by the Dark Kworgs very often. Yet, it was not a terrible civil war, these war episodes have been very cruel and exhaustive. Fortunately, the Kworgs from this small land have found an ally – the Rothrolwëan Farseas. These allies helped them to resist and to stabilize their power.

The empires of Elves were much more independent and their nations were very often fighting against each other. The Kworgs did not feel it the same way as the Elves – they thought they are the only nation and one race of Irmalladdens- brothers in the eternity ( except of the Dark Kworgs). They met together, they traded together, sometimes they entered into the military alliance – if it was needed in the darker and darker world of Illada. 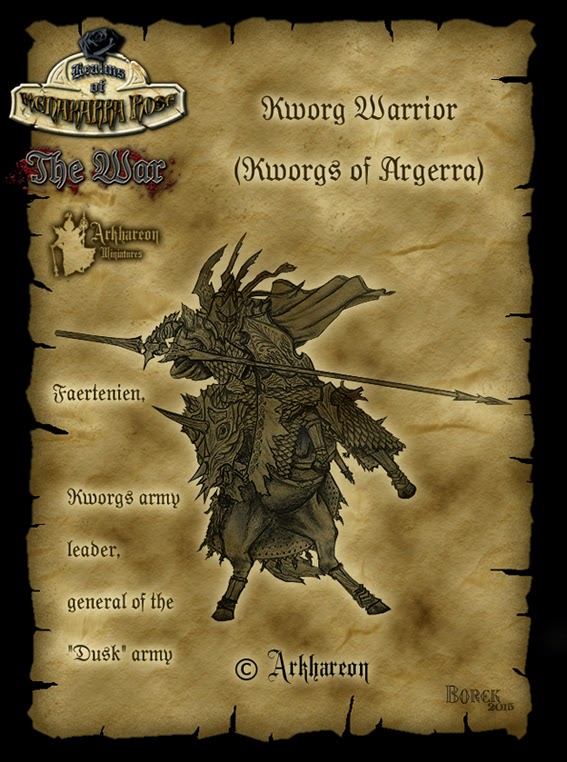 As the Great war of Kenakarra rose started, all the empires of the Kworgs – with an exception of the Dark Kworgs – fought on the side of new Red alliance, which was concluded by the Farseas and Alberia, the powerful human empire. They took a part in many battles in the early stages of this war conflict, without the participation of the dark legions of Bharngstarm yet. They also participated in the battle of Agrianor. They were a very important part of army, which has liberated the besieged city of Agrianor – the capitol of Alberia. At the same time the army of the Dark Kworgs attacked Argerra. They were very cruel, they killed and plundered the land. The main army of Argerra together with all the allies was very far from this attacked empire. But there still was the „Dusk Army“  in Argerra. The Kworgs were very good warriors and they new many war strategies very well, so they left this army at home to protect their empire. So, the story of the tragic battle of Irrnon Soll Terrat begins just now.

Email ThisBlogThis!Share to TwitterShare to FacebookShare to Pinterest
labels: Historical background of Illada, Our Kickstarter Campaigns, The Battle of Irrnon-Sol Terrat