The Mountains Orcs were created almost 18 000 years ago from deformed dark magic flowers by Master of dark magic – Sorok, king of the noble race of The Guiulthans who have fallen in their majesty. When The Guiulthanians were defeated and cersed by its own lord and when Sorok was killed, all his creatures flied in all directions on Illada. The Mountains Orcs used to live high in the mountains and that is why its race created a few of little empires in various mountains places of Illada. There was also one little empire in The Barskanith mountains. This part did not belong to The Bloody Elves already.

The Orcs from The Barskanith mountains were fearful of The Bloody Elves, so they built their good – fortificated dwellings in the highest areas of the mountains, so it was almost unpossible for their enemies to get there. The Elves two times tried to attack the Orcs, but without success. So they had to respect them as their neighbours. The Orcs did not want to meet them too and so they lived without conflicts for quite a long time. As another groups of Orcs living on Illada after Sorok´s defeat they were afraid of the Elves. Some new empires were really destroyed by the Elves, Kworgs or Farseys. But some empires existed and as the Nobels loosed their power, the Orcs and another Nations of darkness became more and more powerful.

The Mountains Orcs of Barskanith were more powerful and self confident. When their neighbours  Elves started to change from noble into the Bloody Elves who attacked another nations without any reproaches, they started to leave their mountains and tried to be more powerful and be able to realize their own interests. They tried not to meet The Bloody Elves, but they did not respect any other nation or race. They attacked another empires and their power grew up. Short period before The  War for Kenakarra Rose they were strong and powerful and they had a powerful enemy too. This enemy was the Farseas empire. Its inhabitants had wonderful wings and they were able to fly and attack the mountains empire of Barskanith mountain orcs. They suggested to do it although they could risk the conflict with Aro-Obeliad Elves, who could think about it as about undermine their borders sovereignty. But there was no more fraternity between them and partnership of noble races lost its power thousands years ago already. The beginning of The  War changed Farseas plans and so all the orcs could not be afraid of their attack in future. But they were still afraid of their nearest neighbours – The Bloody Elves. 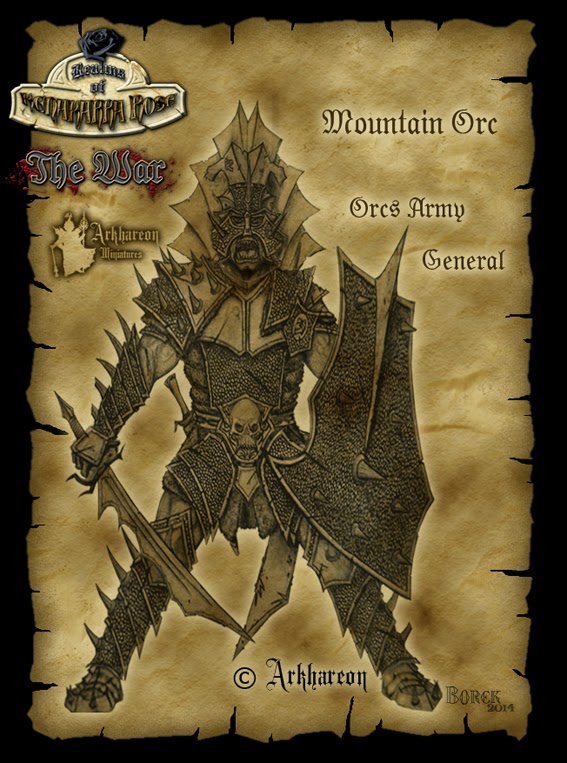 An orc warrior figure you can see in the picture is Grashar - rider on a beast with who you meet in our diorama. Unlike most orc warriors armor his is quite luxurious. Though orc gunsmiths were not able to create such armors, their chieves captured craftsmen and armourers of other races during their muggings, who then serve as slaves. The armor they made bore elements and style armor such as any common weapons produced by orcs but it was better prepared, stylishly cleaner and often with interesting decor. Grashar is wearing such armor, which surface imitate scaly dragon skin. For this piece, however, an alternative armor will be available within stretch goals. A sample of this armor, tangibly Grashar’s alternative helmet, you can see on the following picture next to his original helmet. 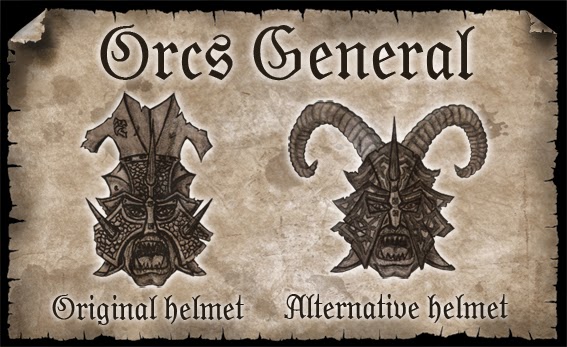 Battle of Rinian - The battle participants I - Aro - Obeliad Elves