In the year 9998 of the first age, something really terrible happened. And the consequences of this event have been unimaginable. Sorok – the dark Sorcerer and Master of the Guiulthans died in the fight with the alliance of noble races and another nations and his soul was rent to pieces. (More informations about the Black Rose creation and its history and about the reasons of the great war you can follow here). With the death of Sorok were all dark magic flows of Illada broken. But these flows were so strong, that at the moment of Sorok´s death they divided the world of Illada into a few parts. The parallel world of darkness and horror was created this way – full of strange, deformed and evil creatures together with demons and terrible monsters. There were new empires and many kingdoms in this new world, but the rules were completly different from the rules of Illada.

During the Black Rose war, the dark legions under the terrible and powerful unknown entity rule found an opened passage to get to the world of Illada. At this moment we will not talk anymore about these events, but we will tell more in the one of our future projects – as a main aspect of it. What is certain is, that in the beginning of the Kenakarra Rose war – when the battle of Rosteyhyrn took its place, the mission of Sor – ran – Master of the Soranian empire – visited the Dark Kworgs empire. The result of this visit was an agreement of non – interference of the Dark Kworgs until they would not be asked to do it. As the allies they were promised to get the beings so terrible and devastating, that nothing similar to them was known on Illada. 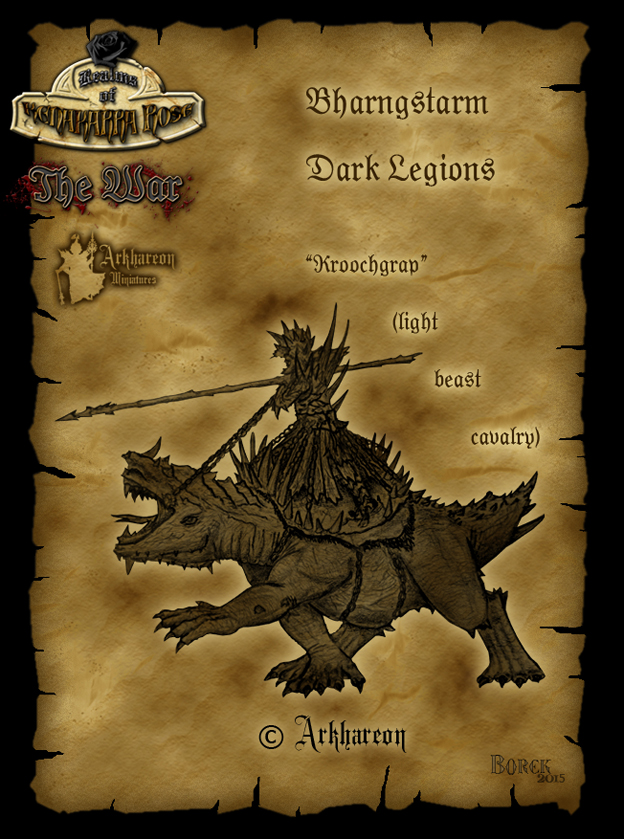 These allies were the Dark Legions of Bharngstarm.

Another chapters will tell you something about the historical background of this alliance and the most important event of its existence – the catastrophic defeat of the Kworgs of Argerra in the battle of Irrnon- Sol Terrat.

Posted by Arkhareon in 6:25 pm

Email ThisBlogThis!Share to TwitterShare to FacebookShare to Pinterest
labels: Historical background of Illada, Miniatures Concepts, Our Kickstarter Campaigns, The Battle of Irrnon-Sol Terrat