In the year 4589 of the first age (the noble races counted their years since the first Kenakarra Rose destruction) the Kworgs had their own king called Abration and they were not happy at all. A part of them followed Graetsnal of Bierenty, the powerful Kworg nobleman and they yearned for power and territorial gains.

They thought they are the witnesses of their own glory decline. They stayed in the shadow of the Farseas – the noble race with great power and glory. (You can follow here formore informations about the world of Illada creation and also about the birthof noble races and another nations).

In the year 4591 the uprising in Riadenia (capitol) erupted. Abration, Master of Kworgs, suppressed this uprising. But he was very kind to all the rebels together with Graetsnal. They had to promise, they will not fight anymore against its own Master and its people and they will not have any dark intentions too.
But Graetsnal yearned for power more and more. His uprising became illegal, although the leaders pretended loyalty to Abration and to all his empire. And during this period they prepared a new attempt to grab power again.

Eight years later , during spring months in the year 4599, the second uprising erupted. The original plan was, that the big cities will be the centres of this uprising. There were the seats of royal officials and these cities were also centres of power. Most of these local attempts have been revealed in a timely manner or some of these uprisings were suppressed in the beginning. The main actions were concentrated in the capitol of the empire of the Kworgs. The first uprising was only a bigger fight, but the second one was a proper war. Abration was able to mobilize his army, because of an early warning he received at the last moment. Next months the capitol suffered from a cruel war, many soldiers, rebels and residents died. Many residents left Riadenia and the positional street war was more and more cruel, brutal and ruthless. There were at least 10 000 followers of Lord Graetsnal in the city.

It took a few months and Abration finally conquered the most important key positions and he surrounded the majority of the insurgents. During the most important battle of the war (it lasted for four days and four nights) all the insurgents were defeated. There were many dead warriors and many prisoners – but Graetsnal was not there on the battlefield. He escaped his fighters.

Abration was very angry, he saw the destruction and he could not be merciful. All those prisoners were tortured and executed. Graetsnal and all his followers were sentenced to death in absentia and Abration started to prepare the military expedition to find rebellious Lord Graetsnal and to kill him.

The whole country heard news about the brutal suppression of the uprising and about the cruel end (public torture and executions) of its leaders. And it was seen, how many followers Lord Graetsnal with his concept of belligerent policy had. Another uprisings started to erupt in the whole land and when Abration and his soldiers left the city gates, Graetsnal had his own army already and he was ready to compete with the Master of the Kworgs.

Following six years they fought against each other in the fratricidal war conflict, we could not see something like that in the history of this world yet. This was the precursor of the dark times for Illada for another 15400 years. The culmination of all these events was the war for the third Kenakarra Rose.

After six years, the population of the Kworgs lost more than two – thirds of its original number, the civil war ended in stalemate. Both sides were weakened and so they entered into peace. Lord Graetsnal with his followers left to the desolate west and he founded here his own empire Karthara. These Kworgs called the Dark Kworgs became warriors and usurpers and they conquered many West empires, especially during the second epoch counted since the second Kenakarra Rose destruction. They often fought with the Kworgs of Argerra – which founded their empire on the northwest. 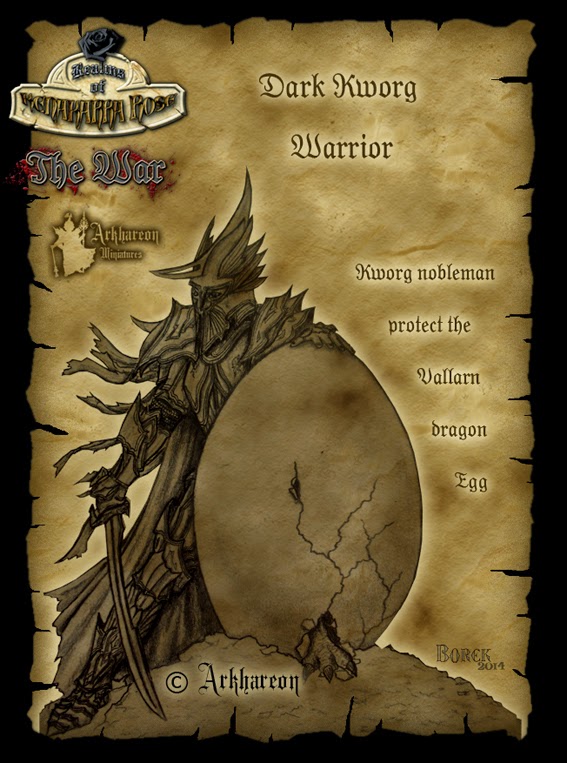 In the beginning of the Kenakarra Rose war the Dark Kworgs stood away from all the important events. But it was just a semblance. When the dark sorcerer Aganork besieged Argianor, the capitol of Alberia empire and when the armies of the Kworgs of Argerra surged to help to this city, the Dark Kworgs attacked Argerra. And they were not alone. In the shadows was hidden another, terrible army – the Dark Legions from the paralel empire of Bharngstarm.

What kind of empire was Bharngstarm and how was the alliance matched?

You can read it later.

Posted by Arkhareon in 9:35 am

Email ThisBlogThis!Share to TwitterShare to FacebookShare to Pinterest
labels: About Project, Miniatures Concepts, Our Kickstarter Campaigns, Sculpts - Figures, The Battle of Irrnon-Sol Terrat